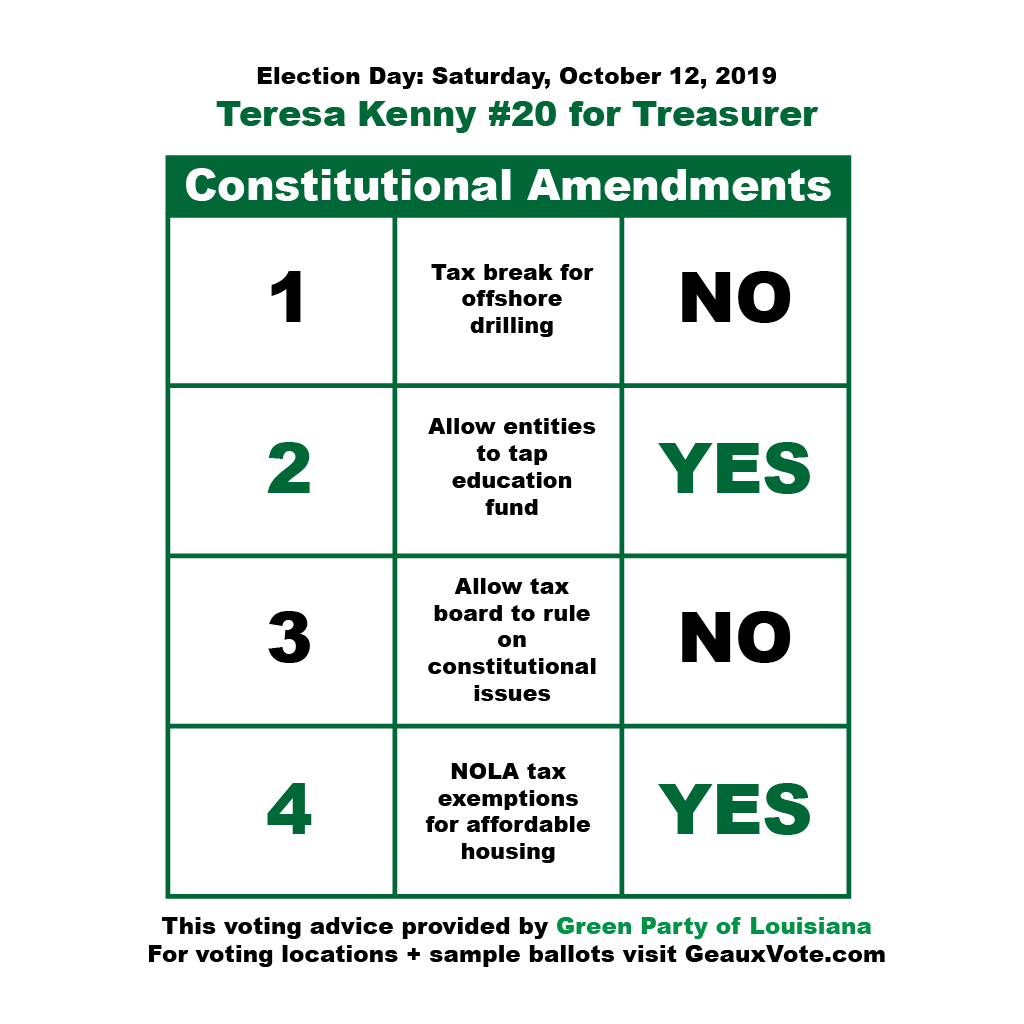 Bart Everson, chair of the Green Party of New Orleans, shares his thoughts in a recent column for Mid-City Messenger:

Every election cycle offers a checkup on the state of our democracy. In the statewide election scheduled for this Saturday, we have 53 races that won't even appear on the ballot. That's because they are uncontested. They aren't even races at all. That's 53 people automatically elected to office without opposition.

If that makes me sound like some kind of radical malcontent, I'm sorry. I don't want to be. It's just that I have these things called values. I cherish ideals like grassroots democracy, social justice and equal opportunity, ecological wisdom, nonviolence, decentralization, community-based economics, feminism and gender equality, respect for diversity, personal and global responsibility, future focus and sustainability. I don't see our nation or our state strongly supporting those values.

I vote in every election, and those values inform my vote. But it's hard to say the electoral process even allows for expression of those values when our choices at the ballot are so limited. (That's why I've been organizing for the Green Party. Join us for our next meeting!) Nevertheless, I see voting as my civic my duty, the very least I can do.

Here's the philosophy that undergirds my voting. I have two screens that I apply right off the top: I'm anti-incumbent and pro-independent. Let me explain. Given my overall dissatisfaction, I'm generally against any incumbent, unless I'm aware of that person as an exceptional champion of the values I hold dear, or if the opposition appears to be demonstrably worse. And since I don't feel the two dominant parties have succeeded in representing me, I'm always willing to give independent or third-party candidates a look.

After applying these filters, it comes down to doing some research and seeing if there are any candidates who support the values mentioned above. There are a few glimmers.

On election day, if you encounter anything unusual — being turned away, a malfunction in the voting machine — ask to speak to the commissioner assigned to your precinct and insist that your concerns be addressed. Also, be advised that individuals who have felony convictions but have completed serving all sentences (prison, probation and parole) do have the right to vote in Louisiana and must re-register to vote to exercise it.