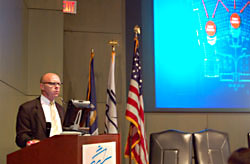 A feasibility study released today indicates that it would be 20% cheaper to renovate New Orleans’ Charity Hospital into a state-of-the-art facility than it would be to build a new hospital on another site.  The report, commissioned by the Foundation for Historical Louisiana and created by a team of architectural, structural engineering and financial consulting firms led by RMJM Hillier have estimated that completely overhauling the existing hospital building would cost $484 million, compared to a $620 million price tag for the creation of a similar facility in another location.

“Can Charity Hospital be turned into a modern hospital? We say unequivocally that it can,” stated Steve McDaniel of RMJM Hillier, the Principal Architect of the renovation plans.  These plans included tearing out the entire inside of the building and replacing all existing services such as heating and cooling systems with new, modern systems.

At its presentation the study was praised by healthcare activists including Green Party of Greater New Orleans (GPGNO) member Brad Ott.

Ott and other GPGNO members have been struggling for the past two and half years to force the re-opening of the hospital, mostly through the Committee to Re-Open Charity Hospital, and last September the Louisiana Green Party endorsed a resolution to call for the restoration of health services at the current location of Charity Hospital.

The report was presented as an “apples to apples” comparison of equal services and numbers of hospital beds for both the scenario of renovation and building a similar hospital elsewhere.  Members of the Committee to Reopen Charity contend that this study confirms what they had long suspected — that it would be far cheaper to re-open Charity, even with major renovations, than to construct a new hospital.  The study also contradicts earlier estimates paid for LSU Health Sciences Division, which claimed that it would be cheaper to build another hospital elsewhere and that Charity was too damaged to re-open.

The study noted that renovation plans were estimated at three years, whereas it would take roughly five years to construct a new hospital.  “Cost to operate the temporary facility for two years would be significant,” stated McDaniel.  These costs were not included in the official estimates, making it even more expensive to choose to keep Chairity closed.

Structural Engineer Robert Silman, of Robert Silman Associates, noted in his portion of the presentation that cracks in the facade of the hospital had “happened almost from day one” and did not represent a significant structural concern.  He gave the building a near clean bill of health structurally.  “It looks like a very good building in very good condition.”

Ott and other health care and civil rights activists are currently organizing towards the re-opening of the hospital, and will be holding a public meeting at Evening Star Baptist Church, 8926 Hickory Street in Carrolton Saturday, September 20 from 1 to 4 PM.

To see the Executive Summary of the Report, go to www.fhl.org.